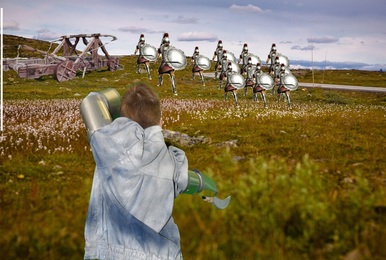 I was at my desk, programming, when I needed symbols for a medieval game. It was very hard, but I had found a string of Greek letters I liked. I was about to save it when I noticed something very odd. The picture was not a website, and it had no data or even a url. I thought about this, but I tried importing the picture anyway. It worked, and I ran the program, but the program instantly crashed,my screen went black, and the computer started shaking. I decided not to tell my parents just for now. But I was really scared when a purple fog began billowing from the screen. It spiraled and expanded, and then formed a picture of space in the center. Was it a portal? Was it an anomaly? Was I going crazy? All of these questions were unanswered, and I was utterly clueless.

First, I wanted to know where it led. Was it in space? Was it an alternate universe? Should I tell scientists? I was very curious, but I knew I had to remain cautious if I was going to enter the portal. First, I put my head through, and I could not believe what I had seen.Spears were in the muddy dirt, the shafts splintered. Then I noticed bodies littering the ground. I was in an ancient war zone,  but what time period was I in? I stepped back out of the portal, then, I put a leg and my head in. That was when my mind was blown. I had a toga on. A toga! Was I in Greece, Rome, Macedonia, or some other country? But that was when I heard a sound like a thousand freight trains stopping. A mighty roar came from in front of me. It was a huge army, charging. It looked like they had giant hair on their helmets when I realized that they were holding a weapon I had seen before. It was even in my game! They were holding eighteen-foot spears. Then, I noticed a crossbow shaped weapon that some held level to their stomach. It was a belly-shooter! I finally noticed a row of super weapon like catapults. They were torsion catapults, the most powerful in all of Greece. I finally noticed the opposing army. It was Athens!

I knew that this army was not Spartan, no, definitely not. I felt sick when I realized I was in one of the most dangerous war-zones of all Ancient Greece! It was the fight between King Philip II of Macedonia and Athens. The smell of decay and stink came over me. Those ancient armies didn’t know about bacteria, or even personal hygiene. Then, I heard a mighty rumbling. King Philip’s army charged, and the spears were so long that the Athenians looked like babies trying to reach something behind a wall. They stumbled, then tried to move forward. All of it was unsuccessful. As if the situation wasn’t already dangerous enough, I heard a sound like a huge string being pulled. They were aiming their belly-shooters. I ran and took cover in the dense forest around me, and just in time, too. Arrows made a path behind me, looking like a fence for ants. By now I felt like I was a dead man, but to decrease my chances of surviving, the portal closed! The situation was so bad I thought it couldn’t get any worse. Yet again, I was wrong. A huge sound boomed throughout the land. The soldiers charged as the archers used their belly-shooters to shoot Athenians. Then the sound came. The torsion catapults were loaded with boulders, and they were still life-threatening today. They fired, a sound like a military airstrike would be in movies. There was a whistling sound, but then a series of booming sounds. Dirt shot up like a geyser, and Athenians lay dead. It was a terrible sight. But they were right, the Macedonians were uncivilized. They charged on, and I looked away as they kept going. I felt like I had no choice. I followed them. They were now besieging a kingdom called Byzantium. I remembered this from my history book. The Athenians violated a peace treaty and tried to ally with Byzantium to stop King Philip. They still lost, which was no surprise. There was only one country who never surrendered to him, and that was Sparta. But here and now I was in one of the most decisive battles in Greek history. The battle of Chaeronea.

The belly-shooters made the sound again, and they fired. I was scared out of my mind, even frozen in terror when an arrow came at me. This is the end, I thought. But the arrow passed through me and thudded in the ground behind me. Of course! I thought. I was a paradox and non-existent in this time period. I could discover anything. I could to almost anything. I was invulnerable in this time period. I realized what I could do in my time if I discovered the secrets of the Battle of Chaeronea. I could be a great, temporarily immortal historian with access to all of the wonders of the world. I could do anything and make current society benefit from it. But I had to get back home. I compromised as I went up-close and personal with the fight seeing every last detail, noticing how the ancient weapons of war worked. I saw everything for real, not a reenactment or computer generation.  I enjoyed seeing this, but I had to get home. After the battle, I saw something terrible, the king was assassinated. I then wandered off, for about four thousand years. I spent my time studying physics and engineering things in my mind. I was almost all-knowing because of my time I spent learning. And I had unraveled the greatest mystery of all, how I got here. The D-flip-flops had accidentally shifted position, forming a special kind of particle accelerator and creating an element that could transport one and replay reality and all of history. I had to build a new kind of particle accelerator, the permanent accelerator, creating a portal I could use all of the time. Once I had made the portal, I used it to travel back home, and not a half-second had passed. I was ecstatic. Now I knew almost every fact ever known by any human. And I wanted humanity to flourish forever.

Time for another adventure.

You are invited to attend the third grade play on Monday, January 19th at 8:30a.  The students made posters for the play.  Click here to see all the posters.