John Green is a YA author and wrote "The fault in our stars".  He is also a popular YouTube personality with the following YouTube channels:  Crash Course, VlogBrothers, CGP Grey, and Mental Floss.

The fifth grade students selected a topic about Ancient Greece, did research, and wrote a fictional account of their visit for an article.  They took what they learned about Chroma Keying and layering images using Paint.NET and superimposed themselves at their landmark.  This project was designed to teach students how to create and communicate information in a fun and imaginative way. Click here to see all the Travel Into History projects.
Greek Philosophers by Milo 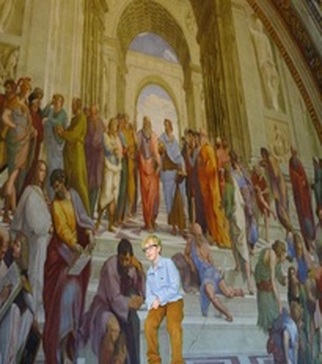 One day, when I was eating Greek yogurt, something seemed strange. I looked into the yogurt, and it started to swirl. I took another bite, expecting nothing to happen, and was suddenly transported to an ancient Greek philosopher’s convention! I saw the date on the yogurt container. It was made in 479 B.C! That wasn’t Greek yogurt! It was ancient Greek yogurt! I looked around. There were very many philosophers. I had to explore.

As I looked around, I talked to a philosopher. He said his name was Socrates, and he immediately asked me “Why do you want to know my name?” I said I was just interested. “Why are you interested?” he asked. I responded “I don’t know.” Socrates said “Know thyself before you ask me anything.” I walked away. “It’s about time I start to look for another philosopher.”

I looked around. I saw many recognizable philosophers. There was Plato, Aristotle, and many more that I could mention. There were even some that I had never even heard of! I went up to some and they told me a lot of theories. Here are some memorable ones.

I walked up to a philosopher named Plato. He told me a great story about how we will never discover everything. Here’s how it went: There are three men in a dark cave. They are chained in place and cannot look at each other. But, they always talk. They see pictures passing their view and they give them names such as “dog,” or “tree.”

They love their life because nothing goes wrong and no one knows any other way. Although, one breaks free from the chains, and turns around. He realizes that the images passing are shadows of people holding up signs. Then, he goes out of the cave, and he realizes that there is an entire outside world! He runs back in to tell the others that are tied, but they don’t believe him, and they are still happy with their life, and the man who broke free is happy with his. I really enjoyed that story. It made me think about life.

I talked to Pythagoras. I had learned about him in mathematics, but I never knew he was a philosopher too. He told me a good way to lead a pure life, and always be the best person I can be, and said it would make me live forever. I doubted that, but what he said was memorable.

I went up to Aristotle. I had studied him before, so I told him that I had talked to his teacher, Plato. Aristotle mentioned how he tutored a good man, Alexander. He said that he predicted that Alexander would be a great conquerer some day. I almost laughed when he said that, but I kept it to myself. Anyways, he told me to use more observation in life than I normally do. I said, “I’ll try,” and walked away.

When I started to get bored, I realized that I was still stuck in ancient Greece, I thought for a while, and then I realized it! I would have to make yogurt in Greece! I talked to Aristotle about it, and he decided to help me. He lifted me up so I could reach the top of their sacred olive tree, and pick an olive. With that olive, he helped me make yogurt. I looked into the yogurt, and it swirled. I had a bite, and was transported back home!!! No time had passed!!! That was a strange experience for me, and I’m glad I could share it with you.

In conjunction with the Fourth Grade study of the US states in the northeast, the students planned a trip for their families to either Boston, MA, Philadelphia, PA, or New York City, New York.  They used TripAdvisor to do the research and Microsoft Word to create a trip brochure. Here's Ally's tri-fold brochure on Boston, MA.  Click here to see all the 4th Grade travel brochures.

The Monster Adjective Project encourages the development of reading and writing skills with a particular focus on writing good descriptions.  Using monsters as a vehicle, students exchange written descriptions and then recreate their partner's monster without ever looking at the "original drawing".  I think you'll agree that Amanda and Evie did an excellent job.  Click here to see all the 2nd grade monsters.